Since the mid-1950’s, Styrian oil seed pumpkins have been produced at the NEBAUER farm in the southern Styrian village of St. Georgen/Stiefing.

To make the original “Styrian pumpkin seed oil”, NEBAUER only uses seeds from the Styrian oil squash, a special breed that grows particularly well in the region of southern Styria. Styrian oil squash is characterised by skinless seeds, which give the oil its exquisite nut taste, caramel flavour and dark green colour.

NEBAUER´s pumpkin seed oil or „the green gold“, as the Styrians call it, is considered one of the healthiest and finest vegetable oils in the world. What was once an Austrian or Styrian secret is now available to sophisticated salad lovers and people pursuing a healthy lifestyle all over the world.

Among all vegetable oils the Styrian Pumpkin Seed Oil stands out because of its high antioxidant capacity. It is naturally high in phytonutrients and selenium (considered to be the most beneficial antioxidant) that help protect from the free radicals that could cause cardiovascular disease, aging, and cancer. Unlike animal fats it is free of cholesterol and rich in essential fatty acids and Vitamin E. Special phystosterols contained in the original Styrian Pumpkin Seed Oil may further have a favourable effect on the prostate 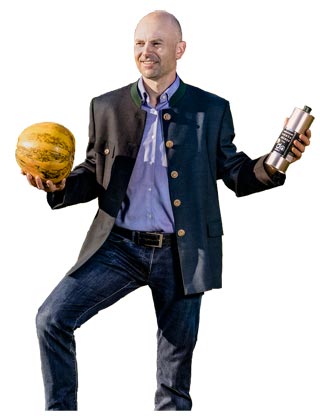 gland and an overactive bladder.

In 1773, the Austrian Empress Maria Theresa declared: "this healthy pumpkin seed oil is unique and much too precious … it shall not be used as a culinary delicacy anymore but shall be collected and distributed only by the apothecaries."

NEBAUERs Pumpkin Seed Oil is considered as an essential part of a healthy diet and lifestyle.

The unique, fine nut taste of NEBAUER´s pumpkin seed oil P.G.I. is ensured by first pressing, strict quality criteria and many years of milling experience. It is our passion to produce the best raw goods on our farm. We use only the finest skinless oil pumpkin seeds for every bottle of our Styrian pumpkin seed oil P.G.I that we produce in cooperation with our partner oil mill in our neighborhood.

Our natural delicacy has received the Styrian State Prize in gold since years, the last one in 2017.

NEBAUER’s Styrian pumpkin seed oil P.G.I. is not only available in Austria. We are specialiced to ship it all over the word.